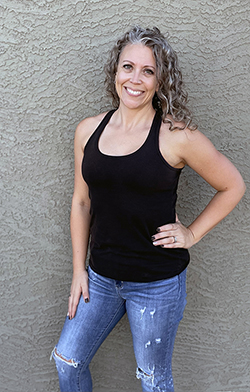 Jen was born and raised in Nebraska and Iowa, and recently made the trek to Arizona, which she now calls home.

Art runs deep in her family—dating back to the late 1700’s—and she has been passionate about art since she was young. Jen attended Waldorf College before starting her career at a daily newspaper where she designed ads, created several special section feature layouts and had great client relations. She advanced into graphic design for Wells Fargo Home Mortgage, and eventually found her calling at a small design agency. There, she spent 13 years working with large corporations such as Principal Financial, Ruan Transportation and Kent Nutrition Group before making the ultimate move to JUVE Creative.

Jen lives an active lifestyle and has been known to work out at crazy-early hours of the morning. She placed 2nd in her age group in a Strongman competition, and ran several half-marathons and two full marathons, one being the New York City Marathon. She loves the outdoors, reading, coffee, wine and college football (especially the Iowa State Cyclones).